The metro backbone transport network mainly transmits the circuits between the backbone nodes of the metropolitan area. This part of the circuit is mainly based on 10G and 100G, and the number of circuits between each node is also large. At present, the metro backbone transport network mainly uses OTN (Optical Transport Network) to realize the transmission and scheduling of services. However, because the power consumption of the OTN equipment is relatively large and the space of the equipment room is occupied, as the number of OTN equipment increases, the equipment space of the existing backbone nodes, the supporting power supply capacity, and the air-conditioning facilities are facing huge challenge.

The shared optical fiber is terminated at each node, and is mainly used by systems with a topology of a ring network (such as PTN and OTN); the exclusive optical fiber is only at the end of a certain two nodes, and provides a direct optical link between the two nodes; The reserved fiber is not reserved at any node. When a fiber link needs to be added between two nodes in the future, it is only necessary to reserve the fiber at both nodes. According to the core link requirements of each node in Table 1, the fiber core connection relationship between the M, N, O, and P nodes is configured. 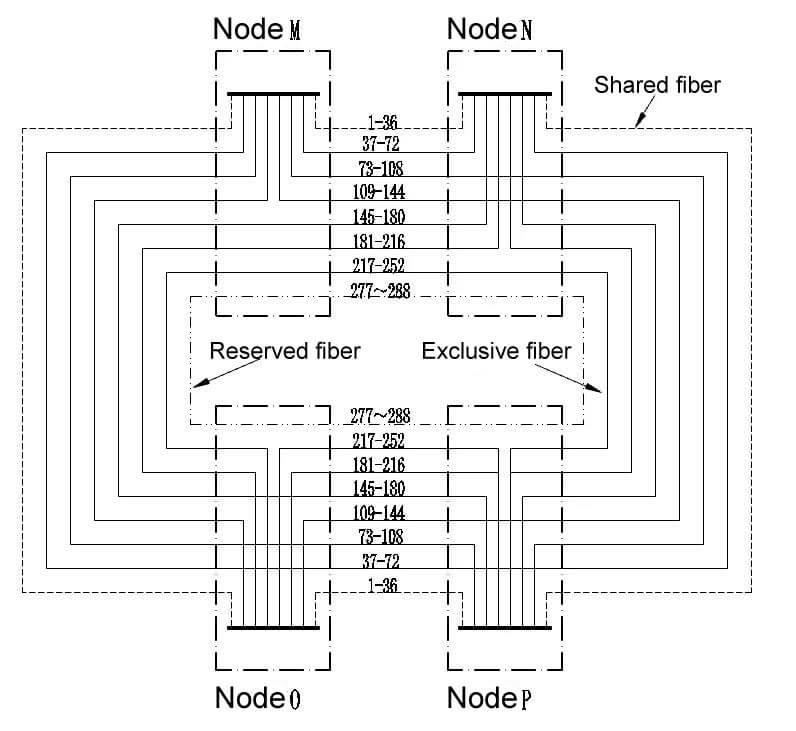 The bare fiber transmission scheme needs to newly build the optical cable between the nodes. Taking the new 288-core optical cable between the core nodes as an example, when the new length is 80km, the cost of the newly built optical cable line is about 2.58 million RMB. Since the newly-built optical cable has a ring structure, the 288-core optical cable can provide 288 pairs of optical fiber links in a clockwise direction and a counterclockwise direction, and the cost of each pair of optical fiber links is about 0.9 million yuan. At this time, the client device connected through the bare fiber also needs to adopt an 80km optical module, and the unit price is about 100,000. The investment in each 100G circuit is about 209,000 RMB. When the length of the newly built cable is less than 80km, the investment will be reduced accordingly. Room space and environmental requirements.

The OTN system supports optical power detection, pre-correction/correction error rate statistics, OTDR and other monitoring functions. Through the network management, data such as channel utilization, port utilization, and proportion of different types of services can be obtained. The means of protection; flexible scheduling of services.

Although the OTN transmission scheme has the disadvantages of large investment, large power consumption, and large space occupied by the equipment room, its perfect network management performance determines its irreplaceable role in the metro backbone transmission network. However, in the face of the large space used by OTN, the space of the engine room, the lack of power, and the problem of noise disturbance, the large-core fiber optic cable is selectively built between some backbone nodes, and the bare fiber transmission scheme is also adopted for the service that has the protection capability of the system itself. A better choice.